Get your space on with these 10 amazing apps from the Jet Propulsion Laboratory. They will amaze you with their material from visiting a comet, to being on the surface of Mars, or joining an astronomy society.

END_OF_DOCUMENT_TOKEN_TO_BE_REPLACED

Federal Bureau of Investigation agents have finally ditched paper files for a new computer system, an effort that took 12 years and cost more than $600 million.

The system, called Sentinel, includes elements resembling Web browsers, with tabs and movable windows, and forms that are filled out in a question-and-answer format similar to consumer tax software.

An FBI special agent demonstrated the system, which went live July 1, to reporters Tuesday. Agents can share files electronically and can track changes made by others. RSS feeds, commonly used in Web browsers to aggregate news topics, can be used to track updates on files.

Agents can also use a search feature, entering a phone number, for instance, to see if it occurs in other active cases or leads.

One of the biggest hurdles to getting agents to accept the system, Mr. Johnson said, has been their reluctance to believe it’s really happening.

END_OF_DOCUMENT_TOKEN_TO_BE_REPLACED

The scene, as written, seems to imply that Scotty is talking about some fancy way of making metallic aluminum into a transparent form. Which ain’t happening. What has happened, however, (and in fact what was happening in research circles at least as far back as 1981) is the development of a transparent aluminum-based ceramic called aluminum oxynitride, aka “AlON,” that sounds a heckuva lot like the stuff Scotty is peddling. In fact, Star Trek IV came out in 1986, and it’s entirely likely that one of the film’s six (!) credited writers got wind of transparent aluminum from then-ongoing publicity about AlON, and decided to use it in the script.

AlON can do amazing things. Here, for instance, a 1.6″ thick AlON plate successfully resists a huge, powerful .50 AP bullet that smashes easily through more than twice that thickness of conventional laminated glass armor:

END_OF_DOCUMENT_TOKEN_TO_BE_REPLACED

Microsoft and Barnes & Noble have teamed up to compete against Apple and Amazon in the eBooks business. The new partnership sees Microsoft investing $300 million in a new Barnes & Noble subsidiary. 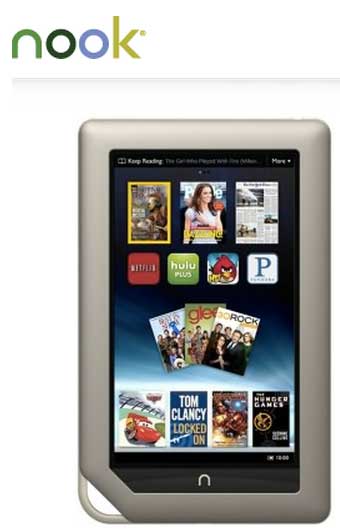 The $300 million investment in the Nook subsidiary of Barnes & Noble gives Microsoft about 17.6 percent ownership of this business unit. That values this part of the business at about $1.7 billion. Before the markets opened this morning, the Nook business was valued about $900 million more than Barnes & Noble itself.

Microsoft will be paying the Barnes & Noble subsidiary $180 million for revenue sharing on the Nook app that B&N will make for the Windows 8 platform. This is nonrefundable, the filing notes. Microsoft is also paying $125 million (equal to $25 million over five years) “for purposes of assisting NewCo in acquiring local digital reading content and technology development.” This, too, looks to be nonrefundable.

But, when you look at Microsoft’s earnings for the last quarter, $5.1 billion in profit (on $17 billion in sales), it looks like the big dog just entered the game. But, don’t forget that Apple is on the scene as well.

On a side note, Target just announced they are pulling all Kindle’s from their stores due to ‘showrooming.’ The practice of visiting Target to physically touch a product, so you can then buy it on Amazon.