In Bunpei Yorifuji’s new book, Wonderful Life with the Elements, each element in the periodic table has personality. From the scary poison of Beryllium to the battery power of Lithium. And not to forget Carbon: 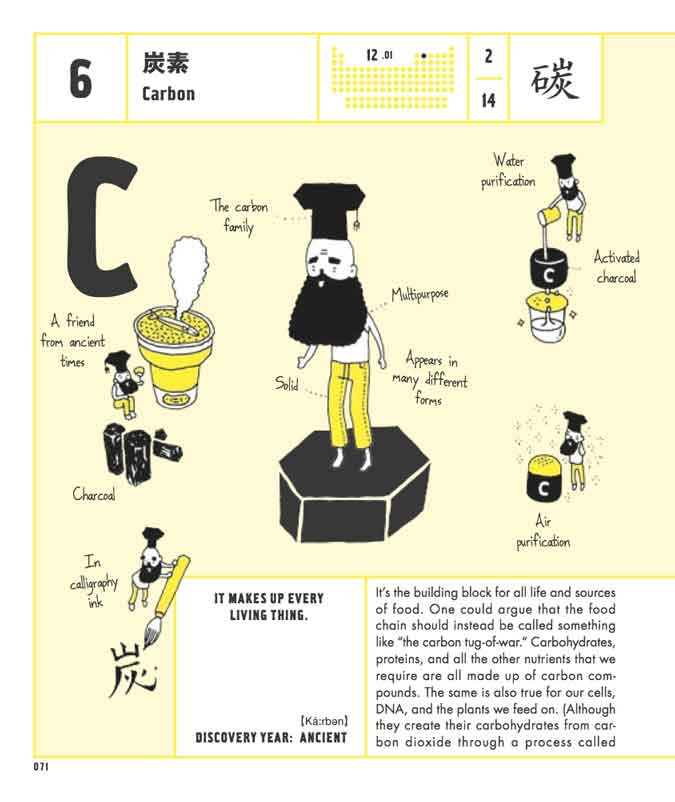 It’s wonderful book and worth buying for only $10. More images from the book are available at Brain Pickings.

I also recommend Bunpei’s past work, the humorous Tokyo Metro “etiquette” posters – Do It At Home.

END_OF_DOCUMENT_TOKEN_TO_BE_REPLACED

I have always found it difficult to watch videos on YouTube. Somehow my body is ok with spending hours on the couch, but a few minutes on YouTube pushes me to insanity.

I think this has something to do with the Muppet Babies and Saturday morning cartoons. Which makes me wonder if the younger, internet-generations have this problem.

Maybe it’s just a conditioning thing. Having spent so many decades on the couch we just aren’t used to internet TV.

Though, some numbers from a popular smartphone app, Read It Later, show that video on the internet is booming:

In the past year alone, video saves using Read It Later have grown by 138 percent, and YouTube is now the No. 1 most-saved domain in all of Read It Later.

We’re also seeing new evidence that our app is helping people consume longer video than what’s been traditionally embraced on the web: In an analysis of Read It Later’s top 1,000 saved videos, the median length was nearly 30 minutes.

Of course, with 68 percent of videos saved under 5 minutes, short-form still rules…users love to save everything from music videos to animation, movie trailers, news clips and more.

News, movies, and music videos…sounds a lot like what TV was like in the good-old days (the 1980s).

Not that I would ever do this…but I do want one of those photo backdrops with the 1X57 logo on it.