With its rolling hills and numerous royal conquests, there’s no place where history comes alive in such a lush setting as it does in Wales. Everywhere you look, the evidence of kings, queens, conflict and empire call to you. There are more than 600 castles – 641 to be precise – so even without trying you’ll come across a few. Even the country’s young capital has one – right in the heart of the city. Cardiff Castle mixes medieval and Victorian gothic architectural styles to thrilling effect.

These proud battlements are a historical legacy that is testament to a tumultuous past, and to the indomitable spirit of the fighting Welsh – these castles were built for a reason.

When the Romans withdrew, the separate Welsh kingdoms were left to squabble and spar for centuries until the Normans landed in the 11th century. But the Welsh proved unwilling subjects even then. It was not until Edward I – the famous subduer of William “Braveheart” Wallace – launched his war of subjugation two centuries later that Wales finally fell to England’s boot.

Edward consolidated his victory with the impressive castles you can still visit today. Most are in excellent repair, with walls as solid now as when their first stones went in the ground.

Beaumaris – the biggest castle Edward built and a truly imposing military fortress. It is located on the island of Anglesey, separated from mainland Wales by the Menai Strait, which is home to Prince William in his duties as a Royal Air Force search-and-rescue pilot.

William is most intimately connected to the most majestic of the Unesco castles, the stunningly preserved Caernarfon Castle. This is where his father, Prince Charles, was invested as the Prince of Wales – and where, one day, William is likely to follow suit.

Keep reading: The Guardian – Discover the proud history of Wales

END_OF_DOCUMENT_TOKEN_TO_BE_REPLACED 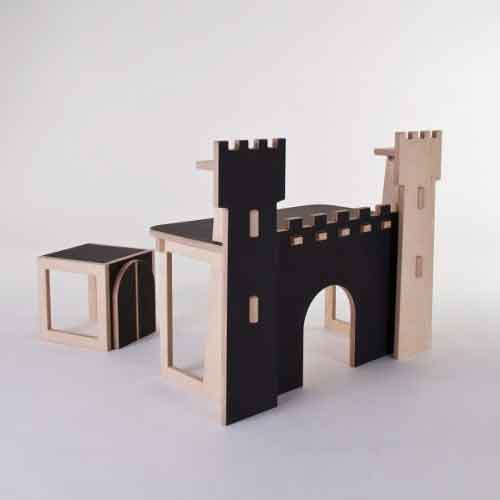 The Fortress is a fantastic children’s desk, designed by At-once for L’EDITO. I am sure my two year old would approve.