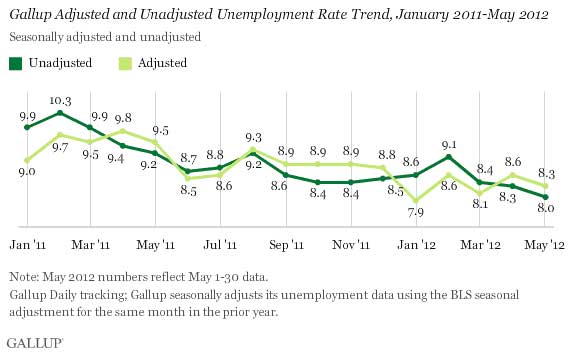 U.S. unemployment, as measured by Gallup without seasonal adjustment, dropped to 8.0% in May, a new low since Gallup began measuring employment in 2010, and more than a full percentage-point decline from May 2011. Gallup’s seasonally adjusted number for May is 8.3%, down from 8.6% in April. However, that remains higher than the seasonally adjusted low of 7.9% recorded in January 2012.

Despite recent drops in unemployment reported by Gallup and the U.S. Bureau of Labor Statistics, the U.S. employment situation remains fragile.

Tomorrow the U.S. government’s will publish its own unemployment numbers form the Bureau of Labor Statistics.