Commence beating the figurative dead horse. As I’ve written previously, (here, here and here) Wikipedia is suffering from a lack of female contributors (less than 1 in 10 editors are women, per the 2011 Wikimedia survey) 다운로드. This has the unfortunate consequence of compromising the overall quality and objectivity of its content, as illustrated in my post, How I Redefined “Man” for The World.

While there are several reasons offered for why women aren’t editing (Sue Gardner, Executive Director of the Wikimedia Foundation, recently gave an interview to CBC highlighting these and summarized them in her post Nine Reasons Why Women Don’t Edit Wikipedia), half of them I just laugh at 다운로드. Women are too busy? I’ve spent enough hours at Starbucks to observe the gratuitous amount of time some women devote to Facebook. Or, women are conflict-averse and don’t like Wikipedia’s sometimes-fighty culture? As Denis Leary so eloquently stated in The Thomas Crown Affair: “Life is full of sh$tty conflicts, okay?” It’s not an excuse g2b.

So what would I do if I was running the “Change the Ratio” Wikipedia campaign? For one, I’d be focusing on the initial phases of the technology adoption curve: awareness and understanding, in the form of education. 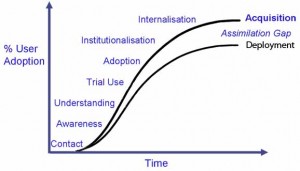 Simply put, there needs to be more recognition and media coverage of the issue, illustrating the societal impact of not having women (as well as other demographics) editing Wikipedia 다운로드. Taking a cue from Simon Sinek, I’d be making it clear to women why it matters. And then I’d enlist some influential voices to help the reach the target audience: women.

Then there’s the use of social media to spread the word.

Again, the point is awareness.

It’s essential. Wikimarkup can be a little intimidating for those not familiar with “code” and having edits reverted can be off-putting, but neither of these factors are something that can’t be addressed with a small dose of education.

Wikipedia is about collectively learning and building and sharing information on the things you’re interested in and are passionate about. It’s time more women make their voices heard.

NOTE: For those interested learning more about the gendergap issue, you can subscribe to the gendergap mailing list. The discussion threads provide incredible insight into what’s going on, everything from harassment on women’s user pages to inappropriate sexualization of images for topical pages.