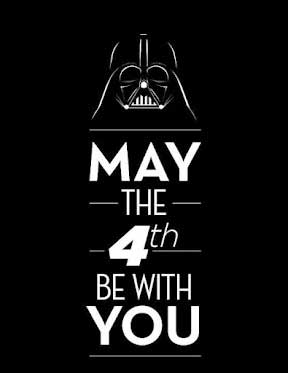 May 4 is called Star Wars Day because of the popularity of a common pun spoken on this day. Since the phrase “May the Force be with you” is a famous quote often spoken in the Star Wars films, fans commonly say “May the fourth be with you” on this day.

Current day Star Wars fans were not the first to introduce the line “May the fourth be with you”: when Margaret Thatcher was elected Britain’s first female Prime Minister on May 4, 1979, her party placed an advertisement in The London Evening News that said “May the Fourth Be with You, Maggie. Congratulations.” This reading of the line has also been recorded in the UK Parliament’s Hansard.

In a 2005 interview on German news TV channel N24, George Lucas was asked to say the famous sentence “May the Force be with you.” The interpreter simultaneously interpreted the sentence into German as Am 4. Mai sind wir bei Ihnen (“We shall be with you on May 4”). This was captured by TV Total and aired on May 18, 2005.

In 2011, the first organized celebration of Star Wars Day took place in Toronto, Ontario, Canada at the Toronto Underground Cinema. Festivities included an Original Trilogy Trivia Game Show; a costume contest with celebrity judges; and the web’s best tribute films, mash-ups, parodies, and remixes on the big screen. The second annual edition is scheduled to take place on Friday, May 4, 2012.