A fascinating, tongue-in-cheek piece about the dynamics in relationships. Believe it or not every relationship is made up of chaos muppets are order muppets. Which one are you?

Every once in a while, an idea comes along that changes the way we all look at ourselves forever. Before Descartes, nobody knew they were thinking. They all believed they were just mulling. Until Karl Marx, everyone totally hated one another but nobody knew quite why. And before Freud, nobody understood that all of humanity could be classified into one of two simple types: people who don’t yet know they want to sleep with their mothers, and people who already know they want to sleep with their mothers. These dialectics can change and shape who we are so profoundly, it’s hard to imagine life before the paradigm at all.

The same thing is true of Muppet Theory, a little-known, poorly understood philosophy that holds that every living human can be classified according to one simple metric: Every one of us is either a Chaos Muppet or an Order Muppet.

Chaos Muppets are out-of-control, emotional, volatile. They tend toward the blue and fuzzy. They make their way through life in a swirling maelstrom of food crumbs, small flaming objects, and the letter C. Cookie Monster, Ernie, Grover, Gonzo, Dr. Bunsen Honeydew and—paradigmatically—Animal, are all Chaos Muppets. Zelda Fitzgerald was a Chaos Muppet. So, I must tell you, is Justice Stephen Breyer.

Order Muppets—and I’m thinking about Bert, Scooter, Sam the Eagle, Kermit the Frog, and the blue guy who is perennially harassed by Grover at restaurants (the Order Muppet Everyman)—tend to be neurotic, highly regimented, averse to surprises and may sport monstrously large eyebrows. They sometimes resent the responsibility of the world weighing on their felt shoulders, but they secretly revel in the knowledge that they keep the show running. Your first grade teacher was probably an Order Muppet. So is Chief Justice John Roberts. 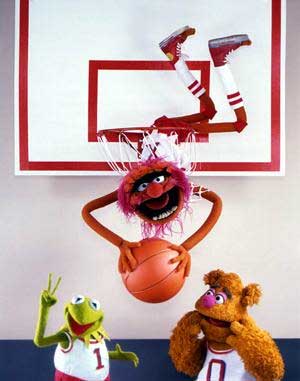 0 thoughts on “What kind of muppet are you – chaos or order?”