Found an awesome punk album from the 60s, featuring raw garage bands from Australia singing about love and surfing. I put together a YouTube playlist of all the songs (but one): 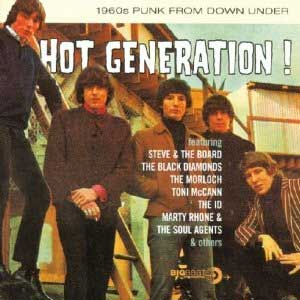 Australian rock of the time had closer stylistic ties to British Invasion music than ’60s American garage did, so what you get here is something that’s somewhat rawer and more juvenile than much of British Invasion’s mid-’60s mod and freakbeat sounds, yet more tuneful and professional than many U.S 다운로드. ’60s garage bands. No famous acts are here, though several have large-to-modest reputations among international ’60s rock collectors, including the Sunsets, the Purple Hearts, the Black Diamonds, and Steve and the Board; others, such as Normie Rowe, Tony Worsley, Johnny Young, and Ray Brown, had some substantial commercial success in their homeland, though this comp focuses on their most raucous material 다운로드.

Some of the sides are just OK, but others are good or close to great, like the Sunsets’ surf-cum-mod “The Hot Generation”; Ray Brown & the Whispers’ mesmerizing, tough, Merseybeat-ish “Go to Him”; the Black Diamonds’ “See the Way,” a superb piece of reverberant ’60s guitar pop; Robbie Peters’ giddy “She Does Everything for Me,” surely one of the finest Zombies covers ever done; and Johnny Young’s “Good Evening Girl,” written by three of the Easybeats but never recorded by that group, although it’s easily up to the standards of their better songs 다운로드. Even the occasional covers of the well-known American or British rockers have original twists to offer, like Worsley’s molten rendition of the Birds’ “How Can It Be” and Peter Doyle’s version of the Spencer Davis Group’s “High Time Baby.”

Buy the album on Amazon – Hot Generation!  1960s Punk from Down Under