But it’s used and has no planes. China bought the vessel in 1998 from Ukraine and had it refurbished – few details of its capabilities are known. But, from Reuters, “defense experts say it lacks the strike aircraft, weapons, electronics, training and logistical support it needs to become a fighting warship.” And so it will stay in the training fleet until they figure out how to land a plane on it.

The response has largely been mocking, from the Brisbane Times, ”if it is used against America, it has no survivability. If it is used against China’s neighbours, it’s a sign of bullying.” And those neighbors are the ones in the crossfire. Japan has disputed territory with China in the East China Sea and the Philippines are arguing over a shoal in the South China Sea.

Still, it is a sign of the rising military power of the Chinese – after all, only 9 countries have an aircraft carrier. Seven of them only have one, Italy has two, and the United Kingdom only uses theirs for helicopters. So the launch could be a symbol of pride, that the Chinese are equal to the other powers. But they have a long journey ahead to challenge the United States and our 11 aircraft carriers.

View the launching ceremony on BBC. And a graphic from The Wall Street Journal: 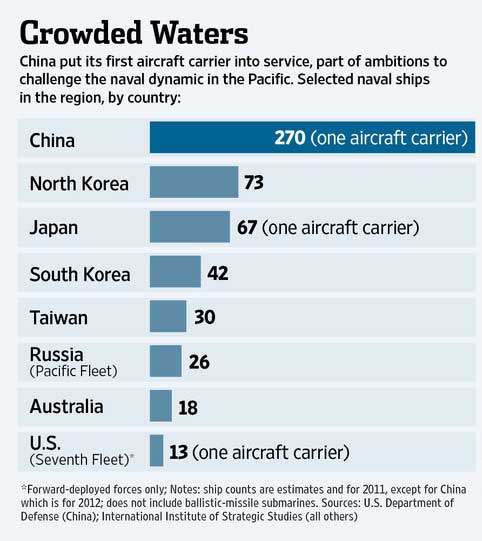